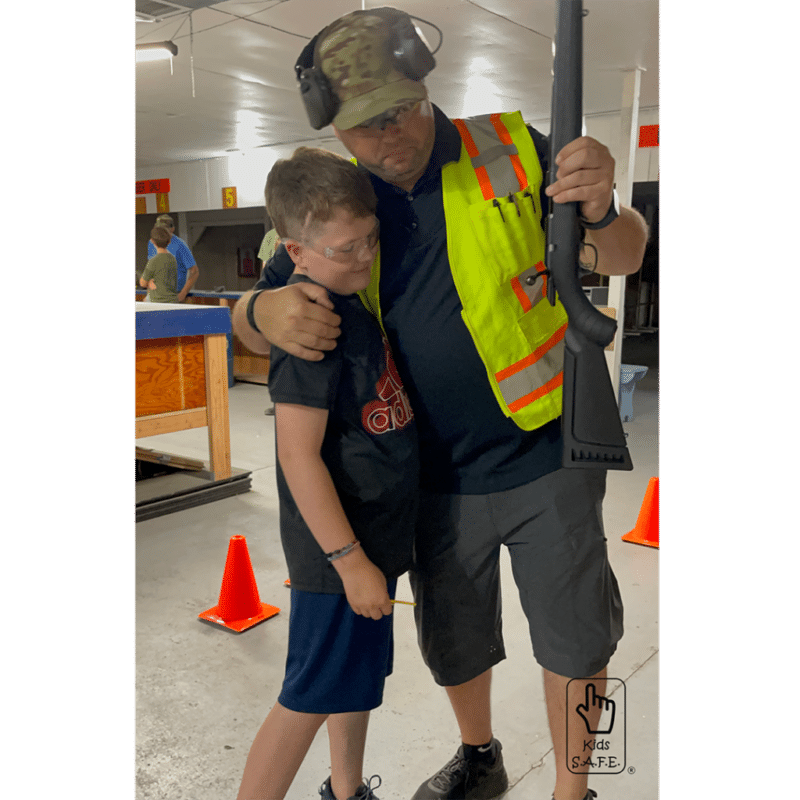 About a month ago, while up in Tualatin for our Kids Firearm Safety 1 Class at Cabela’s. I had the pleasure of meeting a great family that had a very special young man. Young Ryker showed up really early with his father. When they walked in I noticed something different about him. Something that I don’t see too often. He walked in with the help of his father holding a stick. They explained the situation and I helped them find a seat up front. I was still setting up so we visited as we continued to learn more about each other. I learned that Ryker had had a tumor removed when he was 6 and it damaged his optical nerve. He has spent the next 6 years being vision impaired. What struck me was his spirit and attitude. I also noticed a very special bond between him and his father. As the class went on they helped me learn new techniques on how best to communicate with those that are vision impaired. Some of this was allowing him to feel different parts on the firearms that I demo. While I don’t normally advocate for kids to EVER touch a firearm, but in the situation when his eyes are his fingers. It was important for me to be accommodating.

After the class we all took a pic together. As we walked back to the classroom together, we chatted. I asked him “how could we make the experience better for him and others?” He thought about it for a second and replied “can I touch them?” I thought for a second and said yes! Once back in the classroom I took two handguns out of the case. His dad and I cleared them both. We started with a revolver. I wanted him to know what to do if he ever came across one. It was our goal to have him feel where not put his finger if he was ever to be put in a dangerous situation. Being blind, it could be really dangerous if he never is taught these very important skills. I watched his dad talk him through the process and explain every detail of what he was feeling. I realized that his fingers were his eyes. I’m really not sure why I didn’t think about this earlier. I was learning right along side with him. It was a beautiful thing to watch just a dad and his son. I was really touched by it. We then started on a semi automatic and completed the same process. I was able to take a few videos so I could show the world this experience. After we were finished I shared our experience on social media. The response was overwhelmingly positive. My friend John Petrolino even did story on what we did for Bearing Arms. 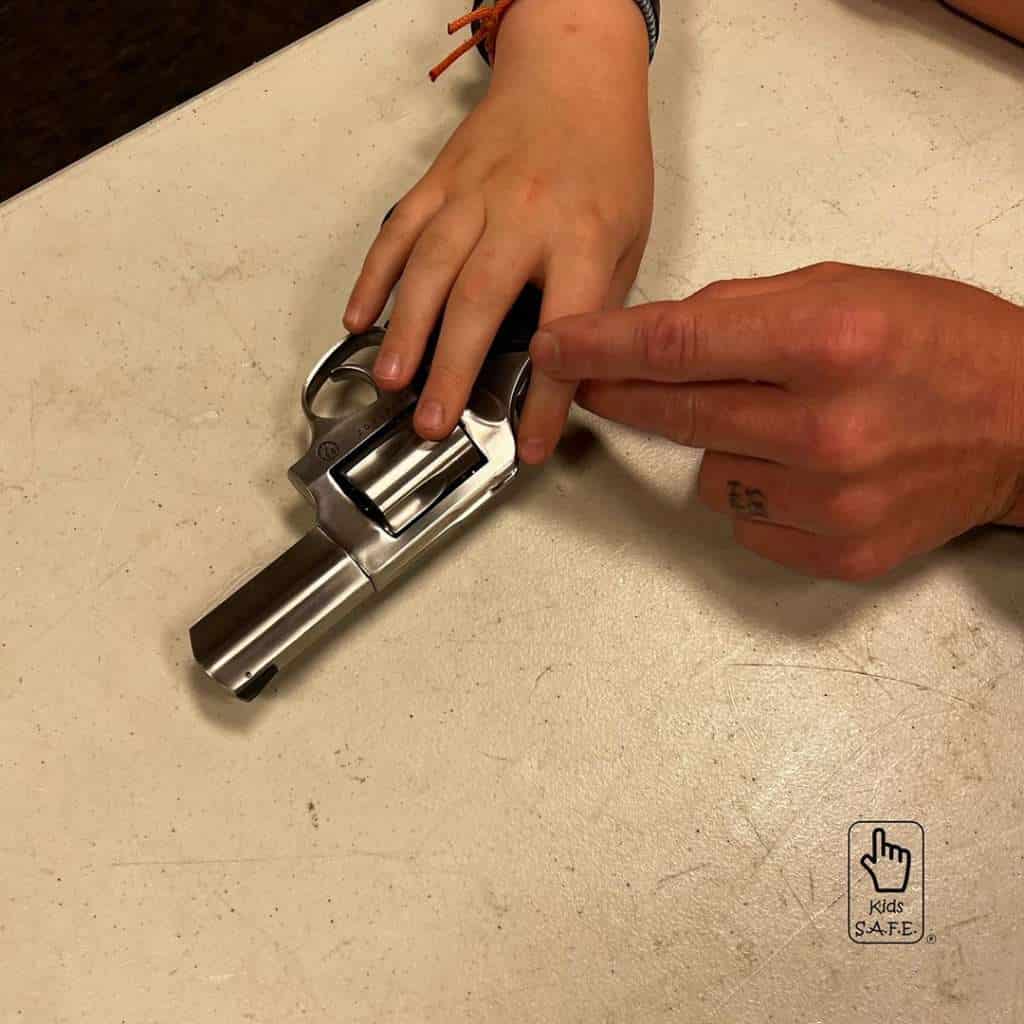 I extended an invite for them to join us on the range. I knew how I wanted to accomplish my vision for safety. His family was on board. I reached out to my friend at the Centralia Rifle Club. That was where our next Kids Firearm Safety 2 class was going to be held. I explained what I was wanting to do. He thought about it for a second and said “let’s do it!” Obviously there is a tremendous amount of liability involved with kids handling guns and when you add a vision impairment. Things could get tricky. Jon never wavered, he trusted me and my vision. It really meant the world to me. I started doing a lot of research on the process. There isn’t a lot of information out there because it’s not really mainstream. We had to get creative with the development of this project. I wanted a way to secure the rifle for safety reasons and also wanted someone dedicated just to him. I learned about Braille and how it worked. I also made some improvements to a magazine that would help make it easier for him. All I wanted for him was an equal opportunity, just like every other kid that would experience. I put Braille on his magazine so he would know where the front is. That way it would be easy for him to orient the bullets down the barrel.

As the class approached I set up a dinner with his family. I wanted to meet so I could help him learn how to load his magazine ahead of the class. I wanted him to be up to speed so he wouldn’t get frustrated if he couldn’t do it the first time in front of other kids. I told him that he will have to out work others to compensate for his lack of ability to see. It resonated with him and he did so great. It was so fun to watch. We had arrived!! He even showed me his Rubik’s Cube skills, where he solved the puzzle in record time. I was really impressed. We had a great dinner and enjoyed all of us getting to know each other. After dinner, we went to the parking lot where we drove a remote control monster truck. It was so much fun.

Sunday came around and it was almost time to do what we do. When they showed up we walked around and got him acclimated to the area. We met everyone involved. We then acclimated him to the rifle and explained how we were going to do what we were trying to accomplish. We adjusted the fit of the rifle to him. We made sure it was secure on the tripod then let him feel his way around it. We helped him understand the commands that I would use when we were going to shoot. We also let him cycle the action so he could understand to complete the process. Once the class started we were able to load our magazines for the first time. This is what I waited for a long time. How would he do? I gave everyone their ammo and they all started at the same time. The hard work before class paid dividends. He loaded his magazine faster than any other kid. While it’s not normally a race, I was quietly cheering him on. It was all working accordingly to plan. Every kid that joined us did really well. It was truly a great day. It was fun to watch his growth through this experience. I could see the pride in his parents faces. He was doing it!! The first time we checked his target, he was able to feel all of the holes in his target. Like the Braille on his magazine, he was able to feel his target so he could understand his progress. It was amazing!

The class ended and everyone really had a good time. What is really important to know here is that we will always put the same level of care into every child that we meet. While some kids take to the shooting sports more naturally than others. We will always give those kids that need just a little bit more help, the help that they need. The goal is to empower our youth into the future. Equal opportunities for every kid. There were talks of Ryker joining the rifle team after class. That made my heart full. That’s the biggest win and all of the extra effort was worth it. We look forward to watching him and others on their journeys as they grow. I’m proud of all of my team that went above and beyond to make this very special class a success. Until next time. Be safe!