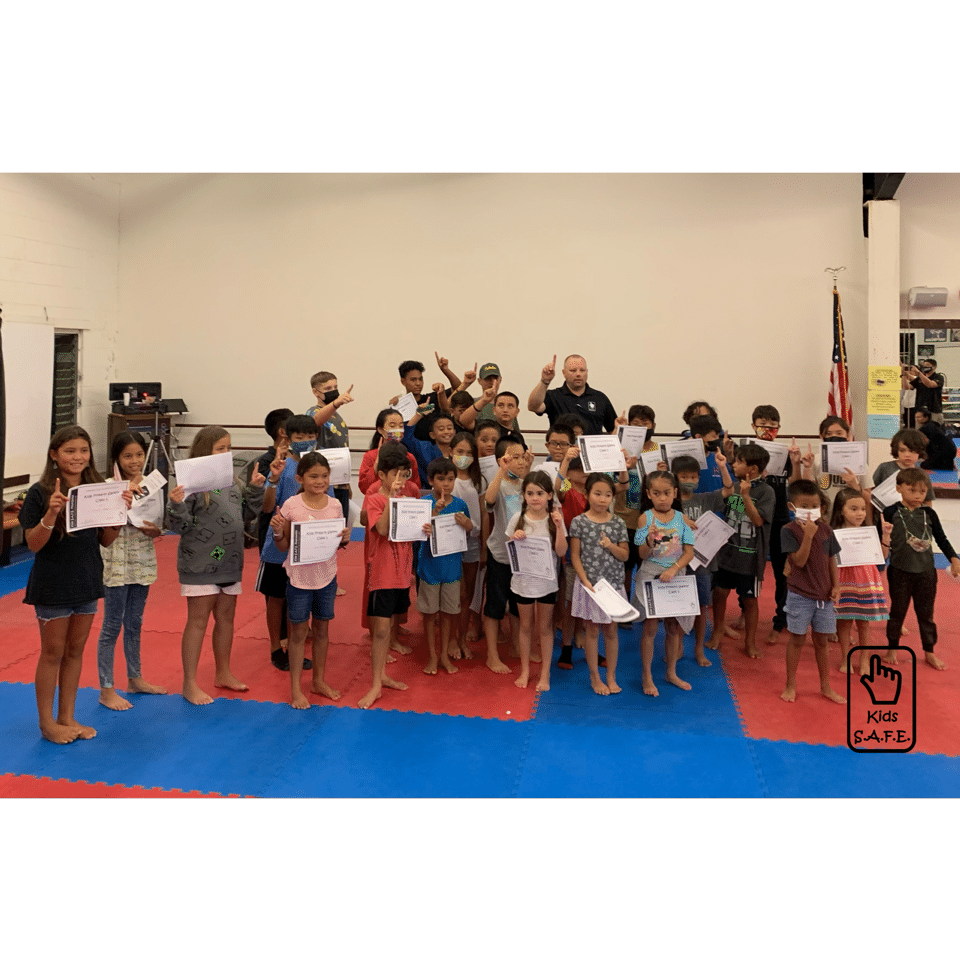 Last week we had the unique opportunity of being able to travel to Hawaii to reach the families there. This journey began nearly 2 years ago when I met the delegates from the Hawaii Firearms Coalition at the Gun Rights Policy Conference (GRPC) back in 2019 in Phoenix, AZ. Our initial meeting was great and we kept in touch. Fast forward to about 10 months ago, my friends from HIFICO reached out to me about the possibility of traveling to Hawaii to teach their families gun safety. Months and months of planning, preparing, and organizing, to get us to paradise. The stress of the unknown on how we would be received by the locals was terrifying. The day came and we caught a flight to the Islands. While many travel to paradise for vacation, we were headed for work. Once we landed in Oahu we met up with our friend Todd from HIFICO, he was our contact on the island. He was instrumental in setting up and coordinating with the different venues that were going to host us for classes.

Our first class on Oahu was held at Smith’s Taekwondo. Bob Smith is very supportive of what we are trying to accomplish there and even cancelled a few classes to make room at his dojo for us. I’m grateful for his support and his sacrifice in business to make our class possible. While setting up I was really nervous. Would anyone show up? Would the kids enjoy the class? Would this work? As the fear entered it quickly left as the families began to arrive in waves. They just kept coming and coming. As a finely tuned machine the group of volunteers that we had worked in unison to get everyone registered and ready for class. It was magic! As the class began there was an electricity in the room. A sort of buzz that we had hoped would occur. We had traveled long and far to reach the kids. It was working out. We laughed, learned, and enjoyed the moment. It was an incredible experience. What originally began as an idea back in 2014 and through a tremendous amount of hard work has lead us to Hawaii in support of their communities. It was a big hit with everyone.

The next day we headed to 808 Gun Range in Honolulu. This is a nice indoor range. We were lucky enough to offer 2 of our Kids Firearm Safety 2 classes and a Kids Firearm Safety 1 class at their location. Our first thoughts of this experience is how thankful the parents were for the opportunity to be able to teach their kids these important safety skills. The strict regulations in Hawaii make what we were trying to accomplish virtually impossible. The families were lucky that we were able to fit in the short list of exceptions so that we could offer this type of instruction. We followed that up with some classroom instruction. We met a great group of kiddos. The reoccurring themes for all of our classes while in Hawaii is how there is no opportunity for safety training there and that there is a definite need for it. The most amazing part about our trip is how wonderful and inviting the people were to us. We are part of their family now and it is a tremendous honor. We look forward to continuing our partnership going forward to bring our program to the islands. I was awarded a Honorary Life Membership to the Hawaii Firearms Coalition. That is something I am very proud of. They are a dedicated group dedicated to protecting the gun rights of the citizens of Hawaii. They do great work and we have added them as an official partner on our website. We look forward to working together to help protect the children of Hawaii. 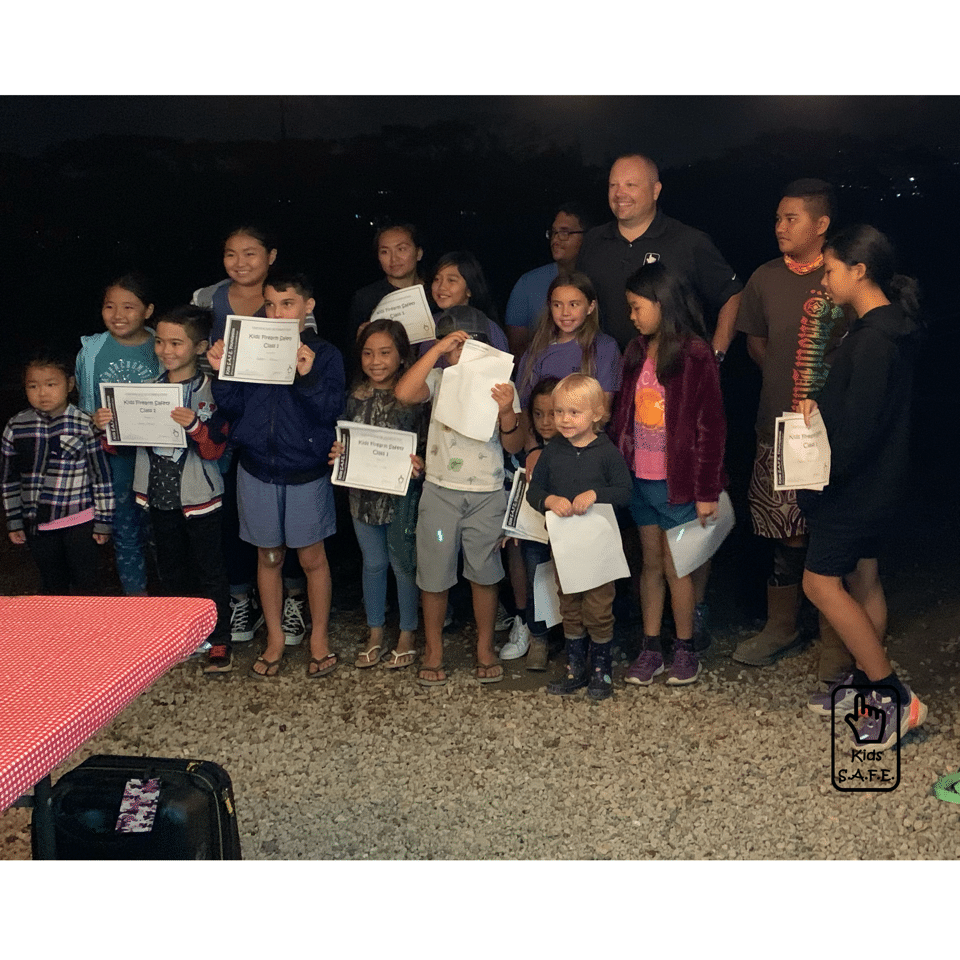 The following day we did an island hop to Maui. The first night we had a Kids Firearm Safety 1 class near Kihei. It was sponsored by our partners with the Hawaii Youth Livestock Association. The venue was outside under a canopy at the Circle L Ranch, where they hold cowboy church every Sunday. They catered dinner and we had a solid group from their local communities. It was perfect! The capper was the full moon at the end of the class. The following day we headed to a private range on the ranch. We had many locals help prepare the range and help with every aspect of our classes. The volunteers did some amazing things ahead of the range time. In the rainy seasons the vegetation grows fast. In the beginning of the planning process Christy sent me pictures of the range and it was clear of vegetation down to the sand. Well a few months had passed and the growth was needless to say out of control. The morning of the class, when we arrived there was a team of volunteers busy with weed whackers getting everything ready for the families. There was a buzz around what we were doing, because in Hawaii it is extremely difficult or nearly impossible to do what we were attempting to do. Restriction makes it extremely difficult to educate the children on the importance of safety. On Saturday we were able to run 3 classes on the range with help of some dedicated volunteers. They were able to procure a selection of rifles and ammunition. All we were able to bring into the state was our Birchwood Casey targets. They were a big hit with the kids because they were able to paste the holes on the targets. The families left with a sense of accomplishment and excitement from the important skills that they had all just learned. The most common question was “can we do it again tomorrow?” Unfortunately, we couldn’t.

We did lay the groundwork for a return trip. We were able to receive a donation that will help start the funding to return to Hawaii. We made important contacts and got support from the different communities. Being accepted by everyone was the biggest victory. It could have been very easy for the families to see us as a threat being from the mainland. Their support was a co-sign of sorts. We are thankful for the endorsements. We will be going back in the next few months to onboard local instructors and to empower the leaders of Hawaii to take an active role in the safety of their kids. We will be working with the Hawaii Firearms Coalition to help introduce the legislation that I wrote back in 2019. A common comment that I got when I was there was “The world is your ocean!” I feel like the tide turned while we were there. We showed the parents of Hawaii that education is a viable solution for their kids.

We want to thank the Hawaii Firearms Coalition, Smith’s Taekwondo, 808 Gun Range, the Hawaii Youth Livestock Association, Pacific Arms Company, and all of the volunteers that gave of themselves and their time to make our events a success. 8 classes and 123 kids reached on Oahu and Maui, that is huge. We are already planning our return. We did set up a Hawaii Project on our website. The public will be able to donate directly there to help support our expansion to Hawaii. All donations to that project are %100 tax deductible and will be used solely to help the children of Hawaii. What an amazing experience. Until next time. Be Safe!